Echo Show 15: The Best Smart Display for Your Family 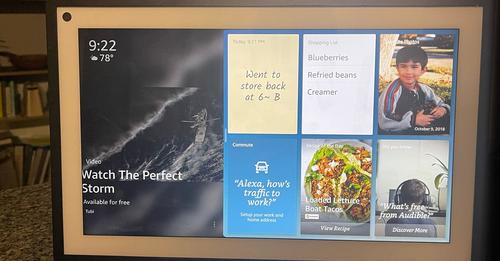 Widgets and messaging turn this smart display into a family communication hub that can be placed on the wall like a digital bulletin board.

The Echo Show 15 is more than just a bigger version of the other models. Features like widgets and messaging turn this smart display into a family organization/communication center that can be placed on the wall like a digital bulletin board. The clean, white bezel makes it an attractive frame for your photos. While you may not want to watch an entire movie on the smaller Echo Shows, the 15-inch model is big enough to enjoy viewing videos.

With so many smart display choices is the Echo Show 15 right for you?

Setting up the Echo Show 15

Before setting anything up, you’ll need to decide where to place your Echo Show 15. It has a mounting template, mounting plate, and screws to attach to a wall, and you need only supply the drill. You’ll likely need an extension power cord (sold separately) when putting it up. Also, consider the users’ heights when deciding where to place it.

The other option is to place it on a counter or table. This is a big screen; if you place it in landscape mode, it will take up a big part of a counter. If you want to put the Show on a counter or table, you’ll need to buy a stand separately as one isn’t included. There are several stand choices available on Amazon, including some that swivel. The stand used for testing was the Sanus Tilt Stand. Once the power cord is connected to the Echo Show, extra length is wound up on the back of the stand, then covered for a clean look.

After getting the Echo Show 15 situated, there is more to setting it up than other Alexa devices. Nonetheless, it’s easy and steps appear on the screen. Much of the setup can be done directly on the Show using the touchscreen. If you’ve set up other Alexa devices or Fire TVs in the past, it may automatically connect to your Wi-Fi. Don’t skip naming the device, as you’ll use it when dropping in (speaking to it directly) from another Alexa speaker or device.

The Echo Show 15 camera is one of its best and worst features. It’s best because of all it can do—from customization to security monitoring and video calling. It’s the worst because it’s a low-resolution 5-megapixel camera that doesn’t make you look your best in video calls, and because it’s a bit creepy that someone can drop in and see what you are doing in the room.

When the camera recognizes a family member, it displays their calendar, reminders, messages, lists, and more. The user walks into the room, and their information is displayed. It can either recognize a family member using Visual ID.

After enabling Visual ID, Face ID is set up by circling your head so it can recognize your face from any angle (similar to Face Recognition on an iPhone). The process needs to be repeated for the profiles of each member of your family.

The Echo Show 15 as Security Monitor

Monitoring works well and covers more area than most security cameras. It’s helpful to keep an eye on a baby or pets. If you enable Alexa Guard, it will notify you when someone is detected in the room while you are away. If you want to use it as a security monitor and you’re mounting the Echo Show on the wall, consider checking the camera’s view before putting it up so you can be sure to get most of the room in view.

As other members can Drop-In to see the Echo Show 15’s camera on their device or Alexa app, you can enable a notification when someone is streaming from the camera. Enable this setting by going to Audio Alert under Live View in Camera Settings on your Show. If you don’t want to be watched, turn off the camera completely using the killswitch on top of the Show.

Video Calling on the Echo Show 15

You can use the camera to video chat to friends or family who also have Echo Shows. You must grant permission to each contact you want to video call. Setting up video calling is a multi-step process, but it’s justified as you are also giving this contact the ability to Drop-In directly to your Echo Show.

Before using this feature, you should set Video Delay under Live View in Camera Settings on your Show. With this delay, the first few seconds of a video call will be blurred, giving you a short time to turn off the camera if you don’t have your hair combed or need to put on a robe.

When making a video call, the onscreen icons are confusing. In other apps, the icons reflect your status. Typically, a microphone with a slash through it means you are muted, and tapping it will toggle off the muting to let you be heard.

The Echo Show 15’s in-call icons are the opposite. The icon reflects what you want to do if you tap the button.

Individual calls have a few features that aren’t available in group video calls. Live closed captioning shows subtitles of what the other person is saying. It’s handy when there is a lot of noise, or if you generally struggle to hear voices clearly.

When chatting with another person, you can also add Artificial Reality (AR) effects (similar to Snapchat and other video apps) and reactions to your calls for giggles. Silliness prevails when choosing to view the other person in a fish tank, with bubbles, in flames, with googly eyes, or wearing a hot dog costume.

With its 15.6 inches of visual real estate, the Echo Show 15 can display your life at a glance. This is what likens the Show to a digital bulletin board.

They are handy for quick access to different lists, but they could be better. Some widgets like Smart Home Favorites require additional setup. Others, like, sticky notes to remind you or others of something you don’t want to forget, are quick to add.

Choose which widgets to show by swiping from right to left in the home screen to display the widgets gallery. Available widgets include, Calendar, Reminders, To-Do List, Weather, Smart Home Favorites, Sticky Notes, Favorite Photos, Commute, Maps, Weather, Music and Audio, What to Watch, Amazon Reorder Suggestions, Your Deliveries, Cookpad Recipe of the Day, Shopping list, and What to Eat.

The Amazon Echo Show 15 is not the only game in town when it comes to smart displays. The Meta Portal Plus is also a 15-inch screen and is even Alexa-enabled so it does what most Amazon Alexa devices can do. The Google Nest Hub can view a doorbell cam and has streaming services like Netflix and Hulu. And although the Echo Show 10 is a smaller previous model of the Echo Show, it has some features not available in the Echo Show 15.

The Portal’s primary purpose is to make video calls, and its 13-megapixel camera outperforms the Echo Show 15. Smart Framing adjusts the camera to keep everyone in the frame, and Smart Volume silences other sounds that might make it hard for the caller to hear your voice.

The Google Nest Hub Max is smaller than the other two at 10 inches. It has Quick Gestures control using Motion Sense, so you can silently control it in addition to using Google Assistant voice commands.

The Nest Hub Max’s 6.5-megapixel camera has Smart Framing that widens its field of view to include others who have walked into the room.

The Amazon Echo Show 10 is very different from the 15. Its 10-inch screen sits atop a speaker containing two one-inch tweeters and a 3-inch woofer. The 13 MP camera has auto framing and swivels horizontally to follow the person on the video call. See the differences of the Echo Show 10 vs. Echo Show 15.

The Best Smart Display for Families

Despite its shortcomings, the Amazon Echo Show 15 is the best smart display for families or multiple roommates. Its bulletin-board format helps everyone in the household to coordinate schedules, leave messages, and drop in from other Amazon Echo devices. When wall-mounted, it further takes on the family center feel where someone can quickly add a sticky note letting others know where they have gone or as a reminder to the family of something that needs to be done.

Each family member gets their own information, so the board is customized for them.

And when part of the family moves away, the Echo Show 15 can make group video calls to help bring everyone together again.