Cancun or Cabo: Which Mexico Destination Is Better for You? 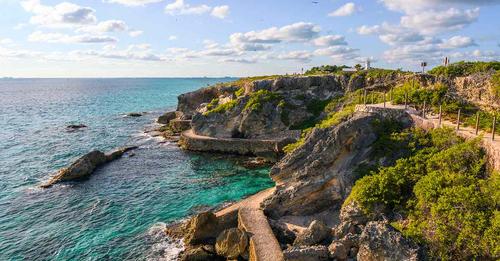 Winter has arrived in full force, which means it’s time to start considering your seasonal escape. Mexico is currently open to international travelers, and with approximately 5,800 miles of coastline, you’ll have plenty of beach options to discover.

Traditionally, Cancun and Los Cabos are two of the most sought-after beach destinations in Mexico — and for good reason. Both are well-connected to the U.S., have a wide range of hotel and resort styles, offer plenty of activities, and feature among the best restaurants in the country. And with each on opposite coasts, no one in the U.S. is ever much more than a four-hour flight from one or the other.

While true, both Los Cabos and Cancun are some of the best beach destinations in Mexico, each one is incredibly unique, with distinct differences that create two totally separate vacation vibes. That’s why we broke them down by several categories — beaches, activities, food, nightlife, and more — to help you discover which is right for you.

How to Travel to Cancun and Los Cabos

To make it simple, you have the shortest flight time to Cancun from the East Coast and Midwest. Meanwhile, the West Coast and the mountain regions have the shortest flight time to Los Cabos. That’s the easiest way to look at it, though not without exceptions. The Cancun International Airport and Los Cabos International Airport in San Jose del Cabo are two of the most connected in Mexico, no matter which coast you’re coming from.

Cancun has direct flights from at least 40 U.S. cities, including from the West Coast, but the majority of direct options to Cancun come from hubs like New York, Miami, Atlanta, Dallas, Houston, and Chicago.

Beaches in Cancun and Los Cabos

Many of the best beaches in Mexico are found in both Los Cabos and Cancun. When it comes to grabbing that perfect beach photo, neither destination will disappoint. But a closer look at each will help reveal some key differences.

Cancun’s beaches offer a quintessential image: soft, sun-bleached white sand that extends into the gently lapping, crystalline sea. The Cancun Hotel Zone alone is a 14-mile sugary stretch, which does not even account for the smaller beach destinations around the city. The beach in this part of Mexico tends to be the focal point for travelers, as the water is the warmest and most welcoming for swimmers of all levels.

The best beaches in Cancun are likely found directly behind your resort, especially if you’re staying in the Hotel Zone. Another Cancun beach area to consider is Costa Mujeres, just 30 minutes north of the airport. This community has several newer resorts in Cancun, and is considered to be much quieter than the Hotel Zone.

50 Years of Cancun: How the Beachfront Haven Became a Favorite Tropical Retreat

The beaches of Los Cabos, on the other hand, are much more golden in hue, highlighting a desert color palette backed by the cobalt-colored Pacific. If beach time is most important on your vacation, it’s important to note that many of the options in Los Cabos are not suitable for swimming because of the strength of the current. While some beaches are protected by sheltered bays, Los Cabos has many exposed stretches of coastline that make swimming in the ocean unsafe. This is why the infinity pool game in Los Cabos is so strong — you’ll still have that unparalleled ocean view and vibe, but from the safety of a gorgeous pool.

If you want a swimmable beach in Los Cabos, consider Medano Beach, Lover’s Beach, Palmilla Beach, or Chileno Beach. Of course, if you’re exploring the eastern coast of the Baja Peninsula, which faces the calmer Sea of Cortez, you’ll find many more options for beach swimming.

Activities in Cancun and Los Cabos

Mexico’s beach destinations are well-stocked with activities, no matter where you go. You can expect a wide array of things to do in both Los Cabos and Cancun, including world-class spas, golf courses, water sports, and excursions. The differences are subtle, but could make or break a vacation, depending on your interests.

Cancun is very much a tropical destination, shrouded in thick jungle that spills out to the Caribbean Sea. But it’s also one of the most built-up places in Mexico — one that was created specifically for tourism. As a result, you’ll find a juxtaposition of ancient and cosmopolitan. The Hotel Zone is replete with high-end shopping malls filled with recognizable designer labels. But the thick jungle reveals the secrets of the Yucatan Peninsula’s ancient past — Mayan ruins. From Chichen Itza to Tulum to Coba, it’s possible to travel back in time hundreds of years to see how the indigenous groups of Mexico lived and thrived. Cancun is close to some of Mexico’s best cenotes, which are underground rivers and caves that played a crucial role in Mayan mythology and religion. Today, they are mysterious, other-worldly places to dive or swim through, with many tours and excursions available for booking.

Cancun’s location on the Yucatan Peninsula opens it up to certain types of adventure activities as well. Water sports, like diving with whale sharks off the coast of Cozumel, are a major draw. Cancun has several islands to explore off the coast, too, including Isla Mujeres, Isla Holbox, and Isla Contoy. Jungle adventure such as ATV tours, zip lining, and dirt biking are also popular in Cancun.

Los Cabos’ landscape is very different, which changes the range of activities. It has the benefit of being at the base of the Sierra de la Laguna mountain range, where the mountains meet the desert, which rolls out to sea. Los Cabos is near Cabo Pulmo National Park on the Sea of Cortez side. As a result, adventure activities abound on both land and sea, from ATV trails and horseback riding to scuba diving and snorkeling in the national park.

Los Cabos happens to be one of the world’s best deep-sea fishing destinations as well. It hosts one of the biggest marlin fishing tournaments in the world. Whale watching is also a huge draw to Los Cabos, as blue whales migrate down to the Sea of Cortez every year to give birth. Cabo San Lucas is home to one of the largest and most exclusive marinas in Mexico, from which many of the boat cruises and adventure tours launch. On the streets of San Jose del Cabo, you’ll enjoy a thriving arts scene, with an entire district that hosts weekly walks and gallery events. And, of course, you’ll find slew of surf beaches up and down the Baja Peninsula.

Both Cancun and Los Cabos are within driving distance of many small towns in Mexico, which offer enriching cultural experiences for day trips or quick overnights. Near Cancun, explore the sleepy fishing village of Puerto Morelos or the haute, bohemian design of Tulum. Escape even further south to Bacalar to visit one of the largest freshwater lakes in Mexico. While in Los Cabos, travel up the coast to the eclectic and mystical Todos Santos, or venture to the capital, La Paz.

Food in Cancun and Los Cabos

Gastronomy is often what sets destinations in Mexico apart. Regional specialties are part of what makes Mexican dining a constant adventure. Seafood is important in all coastal kitchens in the country, with ceviches, shellfish, marlin, tuna, and octopus taking center stage. And, of course, you’ll find tasty tacos everywhere you go.

But Cancun cuisine also focuses on traditional Mayan ingredients and recipes, like slow-roasted pork or fish that has been steamed in banana leaves. In Los Cabos, you’ll find many more dishes that center around the sea, like oysters, smoked marlin, and the Mexican chocolate clam.

Dining experiences are also different in Los Cabos and Cancun. While both are resort-centric, Los Cabos offers many more opportunities to venture off property to a fine-dining restaurant. Cabo San Lucas features some of the most dramatic oceanfront dining options, like Sunset Monalisa, which serves a decadent, three-, five-, or seven-course tasting menu. You can also visit El Farallon at the Waldorf Astoria Los Cabos Pedregal, a cliffside sea-to-table restaurant that pairs seafood with some of the world’s finest Champagnes.

San Jose del Cabo is churning up a reputation as being one of the best places in Mexico for farm-to-table experiences. Just outside the city are three beautifully designed restaurants that source their ingredients on-site: Acre, Flora Farms, and Tamarindos.

Cancun has many fine-dining restaurants as well, but it tends to focus more on the all-inclusive or resort culinary experience. And the majority of travelers coming to Cancun dine at their hotels. You’ll still find elegant restaurants in Cancun, as well as many international chains, many of which face the Nichupte Lagoon, but travelers here mostly enjoy staying in a resort that meets all of their food needs.

Nightlife in Cancun and Los Cabos

When you picture nightlife in Cancun or Los Cabos, visions of Señor Frog’s and cheap tequila may swirl through your head. You wouldn’t be wrong — both Cancun and Los Cabos (Cabo San Lucas, in particular) have had raucous reputations over the years, thanks to spring breakers. But even though you’ll still find places to party on both coasts, those preconceived notions no longer define the destinations.

Safety in Cancun and Los Cabos

Safety is a common concern whenever discussing Mexico travel, especially among those who are newcomers to the destination. Currently, both the states of Quintana Roo and Baja California Sur have Level 2 travel advisory warnings, which encourage travelers to exercise increased caution. That said, by and large, travel to both Cancun and Los Cabos is safe. Travelers who abide by local laws and don’t go searching for trouble will have a safe vacation experience, as is true with most destinations around the world.

Hotels in Cancun and Los Cabos

Mexico does many things beautifully, and that includes its hotels. Both Cancun and Los Cabos have some of the best hotels and resorts in the entire country, and choosing between the two based on their property offerings makes the decision next to impossible.

Still, let’s look at some of the distinctions. Cancun specializes in all-inclusive resorts at practically every price point. The majority of these properties enjoy prime beachfront real estate on the country’s most beautiful swimmable beaches. Plenty of resorts in Cancun are on the smaller, more boutique side, like Live Aqua Beach Resort Cancun and Nizuc Resort & Spa. But Cancun also has many larger properties that are outfitted with dozens of bars and restaurants, as well as lots of entertainment options. If you want variety in a single location, Cancun will not disappoint.

Los Cabos has several large all-inclusive resorts as well, though it tends to specialize in ultra high-end properties — think One&Only Palmilla and the Waldorf Astoria, as well as the smaller, boutique, and design-forward hotels like Acre or Hotel El Ganzo.

The choice may not be simple. Both Los Cabos and Cancun are two of the most iconic beach destinations in the world. But if you know which travel style you tend to gravitate toward, you’ll be able to make the right decision for yourself.