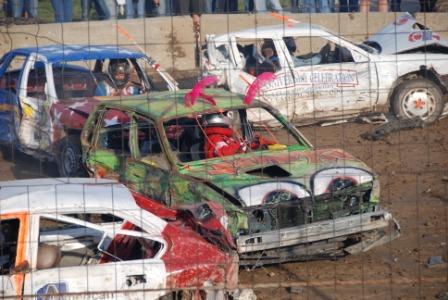 Joe at the Derby!

Brooks Construction celebrated their 100th year in business by hosting a demolition derby at the Baer Field Throughway. Many of their long time associates such as Gary Probst, Andy Brooks, Larry Wiegand, George Hubert and Joe Zehr took to the track to compete for a donation to the charity of their choice. Joe Zehr, owner of The North Eastern Group and North Eastern Group Realty, held on through the final heat, winning the event and selecting the Fort Wayne Sexual Assault Treatment Center as the recipient of the $25,000 prize!

The mission of the treatment center is to be the most respected and trusted resource for superior medical forensic care, education and research in bringing justice to those impacted by sexual assault. Since January 1996, the Fort Wayne Sexual Assault Treatment Center has provided specially trained forensic nurses, sexual assault nurse examiners (SANE) who provide first response medical care and crisis intervention to sexually assaulted women, children and men 24-hours a day, 7 days a week, 365 days a year.  To learn more about the Fort Wayne Sexual Assault Treatment Center , go to their web site at http://www.ftwsatc.com/about_us.htm.

Congratulations to Brooks Construction on their 100 successful years in business and to the Fort Wayne Sexual Assault Treatment Center on their big day!