Inside Out House / MA Office 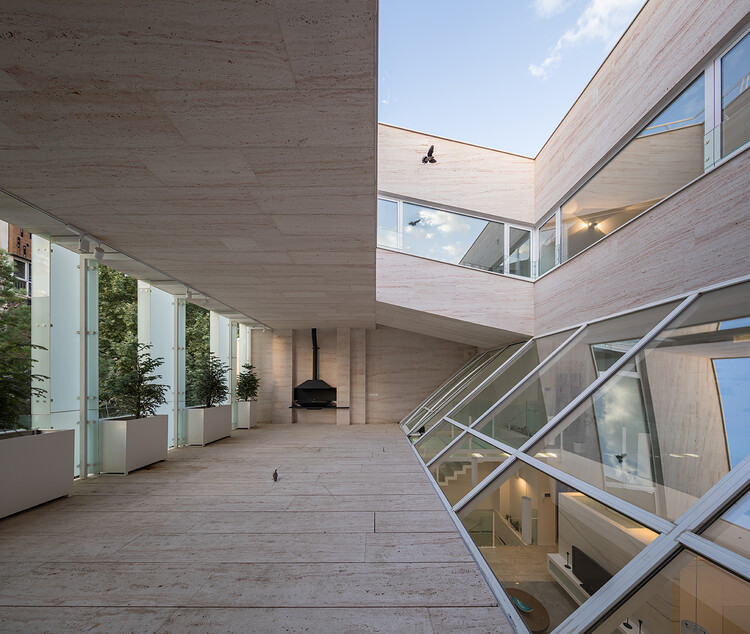 Text description provided by the architects. The urban context of Hamedan has been transformed to the in-fill from under the dominance of the comprehensive plans for five decades. The result of such planning is the creation of a specific relation between the mass and the space for lighting from the south and the formation of the so-called south-facing and north-facing lands. Meanwhile, there is less interest in north-facing houses in building and sales due to lighting from only one direction. In north-facing houses, lighting is provided from the surface of the courtyard and the space at the end, which often provides unsuitable light to the posterior spaces.

The owner of this house also, who had lived there for years, and reconstructed it once, was initially interested in selling his land due to the reason mentioned above, and buying a south-facing land with larger dimensions (the project land with an area of 200 square meters can only receive light from a 10-meter opening), because he thought all family members requested the natural lighting all over the house in an effective manner. In addition, he showed interest in outdoor spaces and growing plants. Another point important of note was the limited budget of the employer for building. The main problem of the project became the theme to respond to the employer’s main concern: How can the natural lighting be shed into the living spaces of these houses directly and effectively?

By moving the vertical empty space of the roof light to the center of the house and connecting it to another horizontal empty space that is like a porch in traditional one-sided houses in Hamedan – such as Ghazanfari and Sharifi houses – as a semi-open space that brings light to the heart of the house, the main question of the study was answered: directing all the main spaces towards this central empty space at the heart of the building and creation of an internal space directed towards the outside and obtaining the maximum natural light.

What is obtained through reviewing the relationship between the inside and outside:

The blurring of the definite concept of the outside in the semi-enclosed space of the heart of the project and the disappearance of the definite distinction between inside and outside of the house and its transformation into a vague dialectic.