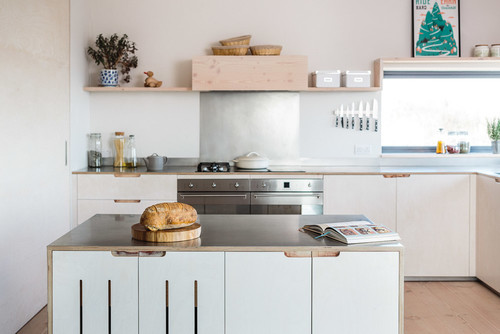 This Cotswolds kitchen was a little different from the projects Sam Shaw of Sustainable Kitchens usually designs. “We do lots of oak-fronted, Shaker-style kitchens,” Shaw says. But the owners of this kitchen, part of a newly built “almost passive” eco house near Stroud, England, were eager to use exposed plywood as the main material in the design. “They wanted it to tie in stylistically with the feel of the rest of the house, which features the same birch ply throughout,” Shaw says. The kitchen is the heart of the contemporary family home, newly designed by architect Charlie Luxton to complement its natural surroundings in the Cotswolds Hills.

Shaw’s instructions for this unusual country kitchen were twofold. First, it had to work with the rest of the house, a newly designed, ecofriendly building that he describes as a “modern cube with wooden shingles covering the outside and lots of zinc and glass, built to merge with its surroundings in the Cotswolds Hills.”

Second, the kitchen had to be robust. “Tara, the owner, runs Vietnamese cooking classes from home and so wanted the space to feel very much like a working kitchen,” Shaw says. Several clever details help the design fit that purpose as well as be beautiful to look at.

Typically we work with oak frames and doors and birch ply carcassing,” Shaw says of the kitchens he typically designs. Here, however, the birch plywood takes center stage. It’s the best-quality plywood you can get for interior cabinets, he says, “because it’s very stable. But Tara liked it mainly for its light color.”

There was a continuity factor, too, since the house already had prominent birch plywood interior doors and shelving, which Tara was eager to echo in the kitchen. All the wood used in the kitchen comes from sustainably managed forests.

Tara wanted a kitchen island she could move around, so Shaw mounted the birch ply unit he designed on giant casters — one of his favorite details in the room. “They’re completely over-the-top engineering casters” and extremely heavy, he says. “But they look great.”

The island is a bit lower than average, but Tara isn’t tall and wanted a working space at a comfortable height. There are sunken outlets in the floor, allowing her to plug in small kitchen appliances as needed.

“The door and drawer fronts were treated with lye to lighten them. It gives them a lovely soft, chalky feel,” Shaw says. “But the end grain and the recessed handles were left natural for contrast. Tara was keen to keep it all very honest.” The plywood was all sealed with an eco-friendly, water-based matte lacquer.

The island is clad on three sides with brushed stainless steel, perfect for a working kitchen. The side of the island you can see in this image shows the doors that have ventilation strips cut into them. Inside are drawers with slatted bottoms for storing vegetables. “It’s never going to be like a cooled larder,” Shaw says, “but vegetables stay fresher for longer when there’s some air movement around them.”

Just visible on the left here are the huge ply sliding doors that open to the utility room (at the back in the photo) and (in the foreground) to the staircase downward to the bedrooms, past bookshelves made from yet more beautiful birch ply.

There are three lighting sources in the kitchen: undershelf lighting (more on this shortly), the overhead pendants and the custom over-island light, which Tara asked Shaw to create to her specifications. It’s made from Douglas fir (the same material as the flooring) and has an LED strip inside it. “It’s quite bright,” Shaw says, “and when the island faces the other direction, it casts a strip of light the length of the work surface.”

Sustainable Kitchens custom made the countertops, backsplashes and island in conjunction with a steel engineering company: 1-millimeter-thick (.03-inch-thick) brushed steel sheeting was bonded onto the plywood with heat- and water-resistant glue. The toe-kick panel is also stainless steel. “It continues that robust feel,” Shaw says. The backsplash behind the stove was made employing the same process, but with two sheets bonded directly to the wall. “The double thickness gives it a bit more visual interest here,” Shaw says.

The shelf above the cabinets, which runs across both solid kitchen walls uninterrupted, is made from Douglas fir from Denmark — the same material as the floors. Tara ordered a little more than was required, as she had ideas about putting it to use in the kitchen design for elements other than the floors. She and Shaw came up with the design of the shelf.

“We wanted it to look completely clean and seamless,” Shaw says of the floating, wraparound design. “But because the Douglas fir boards are quite thin, it’s difficult to hide the fixings and make it strong.” The secret is the clever “box” structure, which boosts support and adds strength without compromising the streamlined visual effect.