The National Association of Home Builders is fighting back against the use of distressed properties in appraisals of new homes. NAHB Chairman Bob Nielsen points out that the two are fundamentally different. Obviously, distressed properties have not been maintained or updated if they are distressed, but a new home would have all of the latest features, energy efficiencies and warranties. To get home building back to levels that will actually assist our struggling US economy, new homes are going to have to appraise for realistic values.

At North Eastern Group Realty, we are prepared to assist our clients with their significant Fort Wayne real estate decisions. Our corporate commitment is to provide real knowledge, proven experience and professional, quality service. To search all Fort Wayne homes for sale visit our website at NorthEasternGroup.com.

This week, the Commerce Department reported that for the first time in five months new-home sales rose, increasing 5.7 percent in September. Builder confidence also rose, reaching its highest level in a year in October, according to an index of builder sentiment by the National Association of Home Builders.

Falling home prices and low mortgage rates are drawing out buyers, some builders report. And builders say they are trimming some of the big losses that have plagued them since the housing bubble burst, but they note, they still have a long way to go in climbing out of one of the worst years on record for new-home sales.

“Hopefully, this is an indication that we reached a baseline of demand for new homes in this country and that better days are ahead,” Larry Nicholson, Ryland’s chief executive, said in a conference call with investors.

The Fort Wayne Home Builders will once again host their spring new home tour this weekend. Admission is FREE  and there will be 30 homes, and 8 villas to tour. There will be several beautiful homes open in North Eastern Group communities including 2 story homes on full basements by both Granite Ridge Builders and J & K Contractors and a ranch on a full basement by D & D Signature Homes in Sorrento. Azbury Park will have a split bedroom ranch by Bob Buescher Homes and Azbury Woods will feature a split bedroom ranch on a basement by Star Homes by Delagrange & Richhart. For the Villa buyer, there is a 3 bedroom villa in The Courtyards of Dawsons Creek (a 55 and over community) by Carriage Place Homes and a 2 bedroom with a study/bedroom in The Villas at Foxwood off Wheelock Road by Star Homes by Delagrange & Richhart. Spring is definitely here and now is the time to tour all of these fabulous homes to plan your next move!

Learn more about The North Eastern Group and search Fort Wayne Homes for sale at our web site!

In the 41 cities Metrostudy covers, 78,000 houses are either vacant and for sale, or under construction –that is less than a quarter of the new homes that fell in that category during the housing boom in 2006 and way below the level of a decade ago.

“If we had anything like normal levels of buying, those houses would sell in 2½ months,” says Castleman. “We’d see an incredible shortage. And that’s where we’re heading.”

The historic drop in new construction mixed with the decline in housing prices is laying the foundation for a dramatic recovery in residential real estate, Castleman told CNN. Castleman expects home owners soon will start returning, which will drive up prices in many markets later this year.

While demand remains low for new construction, he expects that to change. He foresees the recovery following a similar path as previous ones: A severe housing shortage will drive a big increase in demand.

“We’ll get a big surge in demand and the drywall companies will take a long time to ramp up, and it will take years to get new lots approved,” he predicts. “Buyers will show up looking for a house in a subdivision, and all the houses will be sold. The builders will tell them it will take six months to deliver a house.” But they’ll want the house so bad that they’ll “bid the prices up.”

https://northeasterngroup.com/wp-content/uploads/2019/01/NEGRLogo2.fw_.png 0 0 admin https://northeasterngroup.com/wp-content/uploads/2019/01/NEGRLogo2.fw_.png admin2011-04-15 19:06:352011-04-15 19:06:35Housing Shortage on the Horizon?
There are reasons to be optimistic that a housing recovery is just around the corner.
David Crowe, Chief Economist for the National Association of Home Builders (NAHB), said in regards to housing production, “This past year will come in barely over 2009, which makes 2010 second to 2009 as the worst year since the 1930s and both years were about half the previously recorded low. The expansive building of 2004 to 2005 has been more than compensated for, and 45 states are now below their long-term demographically driven production levels. The NAHB estimates that cumulative single-family production is now 3 million homes under the long-term need.”
The NAHB estimates that “as many as 2 million households remain in roommate or parent situations waiting for more promising economic conditions to form their own households. Thirty-somethings cannot continue to live in mom’s basement.”
Crowe also points out that the overwhelming number of distressed (short-sale or foreclosure)  properties that have sold recently have negatively impacted the current price index. The good news is, however, that he believes the “budding housing recovery will not be a barn burner, … but the underlying five-year dearth of construction while the population grew and matured is a compelling reason to believe that it must arrive”.
Find your Fort Wayne Realtor to help you navigate the market.
https://northeasterngroup.com/wp-content/uploads/2019/01/NEGRLogo2.fw_.png 0 0 admin https://northeasterngroup.com/wp-content/uploads/2019/01/NEGRLogo2.fw_.png admin2011-03-01 14:55:122011-03-01 14:55:12Double-Dip? Not Likely

The housing slump caused by the end of the tax credits may be over, with sales of new homes rising 24 percent in June compared to May to an annual rate of 330,000, the U.S. Commerce Department reported Tuesday.

Nevertheless, sales were at their second-lowest rate since 1963 – May’s were the lowest.

“The future is going to be dependent on job growth. There’s no demand because confidence is weak and employment is weak,” says Eric Green, chief market economist at TD Securities Inc. in New York.

In the current market, the idea of a housing shortage may be hard to accept. There are simply too many For Sale signs and delinquent mortgages threatening to turn into foreclosures to make a housing shortage seem like a serious possibility.

But the big drop in home construction over the last few years suggests that it could become a real issue.

During the boom years of 2003 to 2006, production far exceeded the historical average, with builders producing a cumulative surplus of 1.3 million units.

That overproduction remained hidden, though, because investors flush with easy money were gobbling up property. Once the easy money dried up and prices headed down, investors were forced to dump properties.

Today, there might be as many as 700,000 empty units above normal levels.

Still, the great underproduction in the past three years is an issue that will need to be reconciled, especially if the trend continues. Once we start seeing new household formation again, a housing shortage is something we won’t be able to dismiss too quickly.

Home builder confidence reached 22 in May, the highest point since August 2007, on the National Association of Home Builders/Wells Fargo Housing Market Index.

This was the second consecutive month confidence was up, gaining 3 percentage points. Scores lower than 50 are still considered pessimistic.

Analysts said they were surprised by the increase because the home buyer tax credits expired at the end of April.

Weiss Research analyst Mike Larson said the tax credit provided some optimism, but the real driver behind the increase is a sense that the market is actually improving. “Even with the credit in the rear-view mirror, real, underlying demand remains for housing,” Larson said.

The Parade of Homes,  sponsored by the Fort Wayne Home Builders is always a local favorite! This year’s Parade is in Vera Cruz off of West Hamilton and Covington Roads. There are seven builders featuring 1 1/2 and 2 story homes. North Eastern Group Realtyagents can be found in the garage of the Bob Buescher home with gift certificates for $7.50 off an entree of $25.00 or more at BOTH Eddie Merlot and The Oyster Bar. We would like to thank both of these superior local establishments for being willing to participate with us!

Bob’s home is a lovely two bedroom home with three bedrooms and a loft open to the greatroom upstairs and a master suite downstairs. The master suite has an extensive master bath with separate shower and tub. The porch overlooking the pond is accessible from both the kitchen nook and the master suite! A large formal dining room graces the entrance foyer and the open kitchen has every feature the chef in the family could want! Priced at $319,900, this home could never be rebuilt at the same price without the significant discounts offered by Parade suppliers!

Star Homes by Delagrange & Richhart’s new Corporate office is near completion. Located at the Corner of St Joe Center and Wheelock Roads just behind the 10th hole on Cherry Hill Golf Course, this spectacular facility will house a complete design studio! Star Homes has been building their reputation for superior workmanship since 1960. Their solid reputation, excellent staff, and quality craftsmanship will only be enhanced by the capabilities their on site design studio and designer Susan Moran will provide. The official grand opening is just around the corner. Hopefully, we will soon be able to take a peek inside! For more information on Star Homes, their plans, communities and homes for sale, go to their web site at starhomesinc.com. 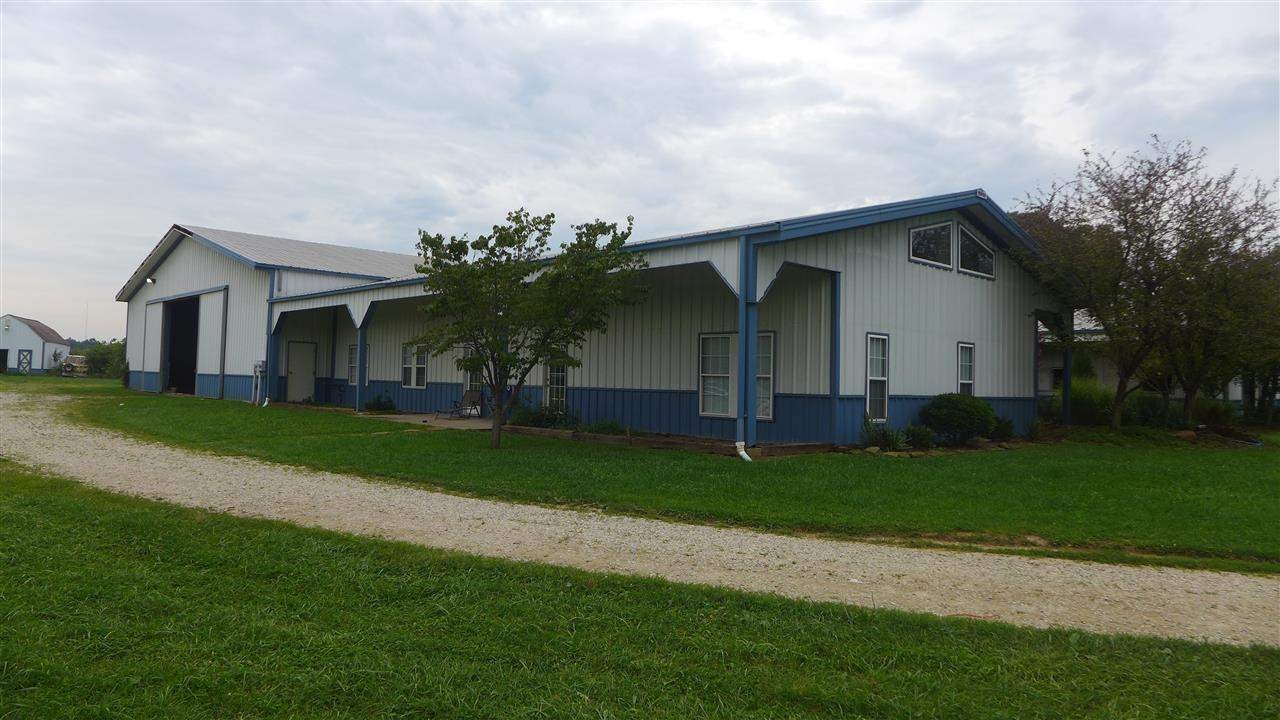